The Prairie Renaissance Cultural Alliance Gallery is pleased to announce an exhibit by artist Carol Ulrich now on display. The exhibit of book sculptures, free and open to the public, runs through March 18, 2011.

Ulrich earned a bachelor of arts from the University of South Africa and a certificate in the art of painting and drawing from the North Light Art School. In addition, she has attended numerous workshops and studied under individual artists in varied styles such as portraits, experimental watercolor, and landscapes.

Along with her husband, Ulrich has lived Ashby since 1985 after spending 27 years in Africa with her family.

The nonprofit PRCA’s mission is to advocate, promote, and coordinate arts, heritage, and cultural activities in Stevens County and the surrounding area.

The Prairie Renaissance Cultural Alliance (PRCA) will host fiction writer and Morris resident Chrissy Kolaya for a short reading from her novel project, Charmed Particles. Bring your lunch to the brown bag event scheduled for Friday, January 21, 2011, from 12:10 until 12:50 p.m. at the PRCA located at 630 Atlantic Avenue in Morris. Beverages and a sweet treat will be provided. The reading is free and open to the public.

Kolaya’s novel is set in a fictional prairie town in which the two overarching industries are a colonial American living history facility and a National Accelerator Research Laboratory that conducts experiments in high-energy particle physics. The novel tells the intertwined stories of two fictional families, but it is based on real conflicts that occurred in the late 1980s in communities under consideration as a site for the Super Conducting Supercollider, a project eventually begun in Waxahatchie, Texas, but never completed.

After the reading, Kolaya will lead an informal Q & A on the book project, the writing life, and tips for beginning, emerging, and experienced writers.

In addition to her work as a writer, Kolaya serves as coordinator in the University of Minnesota, Morris Office of Grants Development. 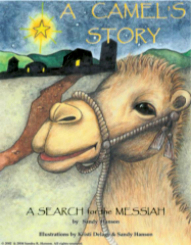 Join the Prairie Renaissance Cultural Alliance (PRCA) for a puppet show featuring Xavier the camel by author and puppeteer Sandy Hanson. Xavier and Sandy will be reading Sandy’s book, A Camel’s Story – A Search for the Messiah in the PRCA Gallery on Sunday, December 19, 2010 at 2 p.m. All children and their families are invited to the reading at no charge and cookies and refreshments will be served. Copies of the book are available at the Gallery for $21.95 plus tax. For more information about the book go to http://www.camelstory.com

The Prairie Renaissance Cultural Alliance (PRCA) invites the public to celebrate arts, culture, and heritage at the 2010 PRCA Fall Extravaganza on Thursday, October 14, 2010, from 6 until 8 p.m. The event will be held at Northern Impressions, Highway 28 in Morris, and will feature music by local artists, delicious food, and a silent auction.

The theme for this year’s annual fundraiser is “When Everything Old Is New Again,” and PRCA artists and patrons have donated recycled, repurposed, or reclaimed items including art work and one-of-a-kind treasures for the silent auction. To add to the festive occasion, costumes from the University of Minnesota, Morris’s As You Like It production, created entirely from recycled materials, will be featured.

All proceeds from the silent auction and $5 admission charge benefit the PRCA’s mission to advocate, promote, and coordinate arts, heritage, and cultural activities in Stevens County and the surrounding area. A cash bar will be available. Please call 320-585-5087 or e-mail prca@prairierenaissance.org for more information about the event.

In celebration of the 50th birthday of the University of Minnesota, Morris (UMM), the Prairie Renaissance Cultural Alliance (PRCA) Gallery will feature work created by UMM’s first four art professors: Fred Peterson, Lois Hodgell, Bruce McGrew, and John Stuart Ingle. The paintings and prints in the exhibit “Images and Artists from Morris’s Past” are from the personal collections of members of the Morris community. The exhibit will be on display in the PRCA Gallery now through Oct. 30, 2010. A reception, free and open to the public, will be held during UMM Homecoming on Saturday, Oct. 9 from 10 a.m. until noon.

Fred Peterson began his career at UMM in 1961 and retired in 2003. He taught basic studio courses and two art history courses each quarter. After Lois Hodgell arrived, he added upper division art history courses and developed sculpture courses. Throughout his career, he expressed his artistic curiosity and insight in two-dimensional art. He is known for his research and writing on the architecture of rural Minnesota and its reflection of the culture, values, and religious beliefs of the immigrant groups of the mid-1800s to the early 1900s. He is the author of Homes in the Heartland: Balloon Frame Houses of the Midwest and Building Community: Keeping the Faith. He makes his home in Maryland.

The late Lois Hodgell began her UMM career in 1962 and retired in 1993. She taught printmaking, drawing, painting, and design. She received a master of fine arts from the University of Wisconsin, Madison in 1961, and was hired by the fledgling Morris college for fall 1962 to teach basic studio courses and to begin painting courses. In 1963, she initiated the first printmaking course. In the mid-1960s, Hodgell began teaching advanced graphics courses. While the courses she taught began to focus primarily on printmaking, she continued to paint in oil and watercolor. She passed away in 2006.

The late Bruce McGrew earned a master of fine arts at the University of Arizona. He was an instructor in studio art at Morris from 1964 until 1967 when he returned to his alma mater for a tenured faculty position. At Morris, McGrew taught design, drawing, and painting. He also taught extension classes. McGrew is remembered as a prolific painter working in oils and watercolors. He also created small etchings in the print studio.

John Stuart Ingle joined the UMM faculty in 1967 and primarily taught painting and drawing. He is known for watercolor paintings often characterized as “magic realism.” Ordinary objects become intensely extraordinary through Ingle’s unique style. Ingle’s work is in several major public collections, including the Metropolitan Museum of Art, the Yale University Art Gallery and The Art Institute of Chicago. In 1996, he was commissioned to create the new Betty Crocker image. He retired from UMM in 2003 and lives in Minnetonka.

The Prairie Renaissance Cultural Alliance announces that it has been awarded a $8,100 grant from the Lake Region Arts Council in Fergus Falls to offer an after school arts program for children grades 1–6. The new program, Art at the Zone, is co-sponsored by Morris Area Community Education and was designed with input from the Morris Area Arts Boosters.

Art at the Zone will offer eight different opportunities throughout the school year for students from the local area to explore their interests in the arts. Music, drawing, theatre, sculpture, painting, dance, literature and design will be offered. The classes will be held at the Morris Area Elementary School.

The first sessions of Art at the Zone start September 20 and will offer dance and drawing. Each class will meet at different times once per week for five weeks. Students in two different age groups may choose to take one or both of these classes. William Pelowski will teach the drawing class, and Wendy Lindberg will teach dance.

“The PRCA is delighted to receive this grant to offer these opportunities to area children with our community partners,” states Ferolyn Angell, PRCA president. “Thank you to Lake Region Arts Council for making this possible, and to William and Wendy for leading our first sessions. Both are popular and experienced PRCA Art Camp teachers.”

Look for further information and details in the Art at the Zone brochure that will be sent home with area school children. Brochures can also be obtained by contacting PRCA at 320-585-5037 or Morris Area Community Education at 320-589-4394.